Archery is one of the fastest growing sports in the UK. It captures the imagination of over 45,000 registered archers and many more at 'have a go' events at activity centres, holiday parks, fairs, outdoor shows and tourist attractions across the UK. It is a sport for all ages and is very accessible.

A very inclusive and social sport, archery attracts all ages, young and old as well as able and disabled, all shooting and competing together. You may even come across a whole family shooting at a club or at the same tournament as a large number of parents, children and often grandchildren are members together.

Archery is a very sociable sport and provides the opportunity to join a club, shoot in a social setting and participate in friendly club and inter-club competitions (indoor in winter, outdoor in summer). Whatever your need, you will find that archery provides a balance between fun and fitness no matter what your ability.

Archery is a unique sport, whether your interest is traditional, historical or in the latest technologically advanced equipment there is something for you.

The two main disciplines of the sport are Target and Field archery, but there are many other variations as well so it is easy to find something to suit you. Many archers shoot more than one discipline and/or bow type so you don't have to limit yourself to just one.

Target archery is the most popular form of the sport (the style seen at the Olympic and Paralympic Games), in which archers shoot a set number of arrows at set distances on flat ground (most clubs share sports grounds or have their own land). Often the targets will start at the furthest distance away (up to 100 yards (90 metres) for men and 80 yards (70 metres) for women) and be moved forwards over the course of the 'Round', (The thinking is that historically this came about to represent two armies advancing on each other, the archers having to alter their aim as they get closer). The traditional five colour circular target is generally used and target archery is practiced both indoors and outdoors. Indoor shooting is normally done during the winter and is shot at smaller targets and at a single, shorter distance (normally 20 yards, 18 metres).

Field archery involves shooting at targets of varying distances, sometimes known, marked distances and sometimes unmarked, where you have to use your skill to estimate the distance. Set out a little like a golf course, the archer will walk along a set course and shoot at around 24 different targets, each one varying in distance. It can also require you to shoot up, down or across slopes. Usually set up in woodland and rough terrain, Field targets can be round paper faces, animal paper faces or lifesize foam 3D animals.

Other forms of archery include:-

As well as the above there are groups that specialise in a particular interest, the British Longbow Society (BLBS) being one well known organisation and there are many others including Horseback, Kyudo, Re-enactment and Role Playing.

Please note – Hunting (including vermin) with Bows or Crossbows is illegal within the UK.

Archery is a varied sport and so there are a number of organisations that cater for the different areas. Each organisation may work to their own rules and regulations so it is worth looking around to find the one that suits you. 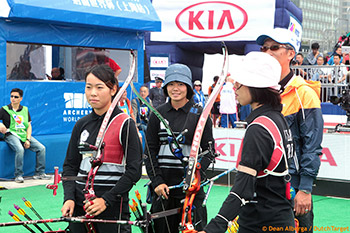 World Archery is the International governing body responsible for providing archery at major sporting events like the Olympics, Paralympics, World championships and World Cup events. They cater for all styles of the sport and hold World Championships for seniors and juniors in Target, Field and 3D Field archery. World Archery has more than 150 member countries.

Archery GB is the main National governing body in Great Britain and Northern Ireland and dates back to 1861. Affiliated to World Archery, they cater for all disciplines of the sport. Archery GB are supported by organisations such as Sport UK and are responsible for the qualification and selection of GBR teams at major competitions such as World Championships and the Olympic and Paralympic Games. Archery GB is the largest archery organisation in the country with approximately 45,000 members, providing support to national squads, clubs and schools.

Affiliated to Archery GB are the individual home nations who are responsible for their own areas.

The IFAA was founded in 1970 with the goal of agreeing a set of basic rules by which field archery tournaments could be run internationally. They now have more than 40 member countries and over 50,000 archers. Shooting at paper faces and 3D animals at both marked and unmarked distances. The IFAA have many bowstyles and hold European and World Championships which are very well attended.

There is no National body for the UK to the IFAA as each of the home nations affiliate directly. The individual organisations are:-

The NFAS are a UK field archery society and are very popular with traditional archers as well as those shooting more modern equipment. The targets shot are mainly animal based, either printed paper, painted or 3D and at unmarked distances. The NFAS have a wide selection of categories for all bow types and host many competitions around the country.

There are many other organisations within the UK, you can find a selection of them on our links page.

How do I get involved in Archery?

There are many ways you can get involved and progress in the sport as an archer, leader, coach, judge or club volunteer.

Anyone interested in taking up archery can contact their local club by searching our Useful Links page, googling local archery clubs or by using Archery GB’s Club Finder. With over 1240 clubs in the UK, there will be one not too far away. Some clubs specialise in particular types of archery such as 'Target' or ‘Field’ and many have access to indoor facilities over the winter season for practising and shooting in competition at closer distances.

In order to join an archery club, you are typically asked to take part in a beginner’s course run by the club. This usually consists of four to six introductory lessons covering a basic understanding of technique and disciplines for shooting in safety and with relative accuracy.

Courses will be organised and supervised by experienced archers and could be held indoors or outdoors.

How do I become a coach or leader?

To get started in coaching all you need to be is enthusiastic about archery and the progression of others. There are archery awards set up to train participants to work with beginners: